The bicorne or bicorn (two-cornered/horned or twihorn) is an archaic form of hat widely adopted in the 1790s as an item of uniform by European and American military and naval officers.

Descended from the tricorne, the black-coloured bicorne originally had a rather broad brim, with the front and the rear halves turned up and pinned together (in English the shorter front brim was called "the cock"—hence "cocked hat"—and the longer rear brim was termed "the fan"), forming a semi-circular fan shape; there was usually a cockade in the national colours at the front. Later, the hat became more triangular in shape, its two ends became more pointed, and it was worn with the cockade at the right side. This kind of bicorne eventually became known in the English language as the cocked hat, although to this day it is still known in the French language as the bicorne.

The land troops worn their bicornes side to side or "athwart" for maximum visibility to their fellow soldiers. One of Napoleon's Bicorns has just sold for 2.2 million $.

The naval officers wore their Bicorns in the fore and aft style to minimize wind resistance. 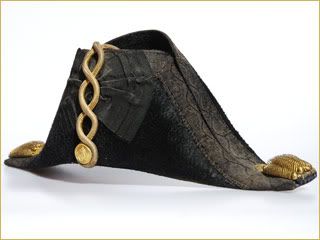 We have been enjoying making custom Bicorns for our customers in both styles. If you are interested in having your own bicorn please see our Fore and Afts and Napoleons or contact us at tt1991@talltoad.net or 276 694 4636.